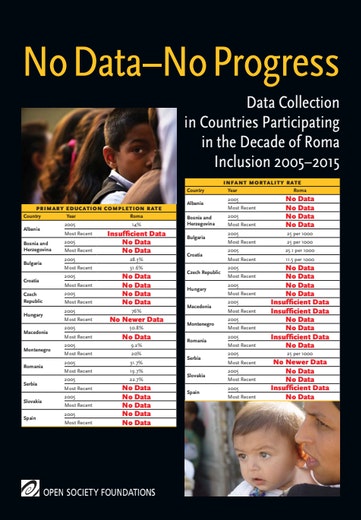 The year 2010 marks the halfway point of the Decade of Roma Inclusion. It is a logical place for the 12 participating Decade countries to assess their progress to date so they can ensure that their initiatives are on track and are effective, and that conditions for the 4.5 million Roma who live in these countries are improving. By evaluating their efforts, governments would demonstrate their seriousness and commitment to the political pledges they made to their Roma populations at the Decade’s inception in 2005.

Yet five years later, the lack of data about Roma communities remains the biggest obstacle to conducting any thorough assessment of how governments are meeting their Decade commitments, despite widespread agreement among participating governments about the crucial need to generate data disaggregated for ethnicity in order to assess and guide policies.

This data deficit prompted the Open Society Foundations’ Roma Initiatives to ask the basic questions that guided this report: What are the barriers to governments compiling or generating data disaggregated for ethnicity? Do such data even exist? If so, have governments collected disaggregated data to assess progress? Have governments made the necessary changes in their practices to ensure that this can be done, and that data are available? Are there other organizations (NGOs, policy institutes, multilateral and intergovernmental agencies) that are producing quality data that could help states to measure progress?

These questions were applied to the current context in which censuses continue to be the main instruments that countries use to collect disaggregated data on their populations, yet current census practices result in an undercount of Roma. This discrepancy shows up as a wide gap in official and unofficial data. There are also gaping holes in existing, available data disaggregated by ethnicity in each and every Decade priority area.

For example, information on primary school completion rates for Roma children did not exist in two thirds of the countries participating in the Decade. Completion rate data in the remaining countries were largely the result of independent research. While some information from independent studies and initiatives is useful and important, it cannot fill the needs for clear, comprehensive data.

With gaps and unknowns like this, how can policymakers devise effective policies and responsibly allocate resources? The lack of disaggregated data on ethnicity and other criteria not only hinders progress in monitoring the Decade, but also limits the ability of participating countries to implement sound policies to promote more equitable societies.

Without comprehensive data to evaluate government efforts and guide policies, the situation of Roma—a group already on the margins of Europe—is likely to remain dire.

The stark gaps in data revealed in this report are a call to governments to make a serious, concerted effort to reduce the Roma data deficit before the Decade has passed. No Data—No Progress offers 11 concrete, achievable measures that policymakers at the national and international levels can act upon in the next 18 months.

Improving data about the living standards and conditions of Europe's Roma communities is an achievable goal that can have an immediate and long-term impact on projects, policies, and people. The support, resources, and independent data for such an effort exist. It is largely a matter of taking action and having the political will to collect the data and confront the realities they reveal.

Two electronic versions of this study are available for download. The shorter version provides a summary of the study's findings, while the longer one presents a detailed analysis of data collection on Roma populations in each of the 12 countries participating in the Decade of Roma Inclusion.

Q&A: A Step Toward Justice for Roma Women

In November, the Slovak Republic formally apologized to Roma women for a program of forced sterilizations that stretched out for decades. How a Slovak human rights group helped hold the government accountable.

The Time Is Now

Leaders in the EU are confronted with a dual obligation—to restore healthy environments for Roma, and to do so with the full participation of Roma communities themselves.