Nothing About Us Without Us 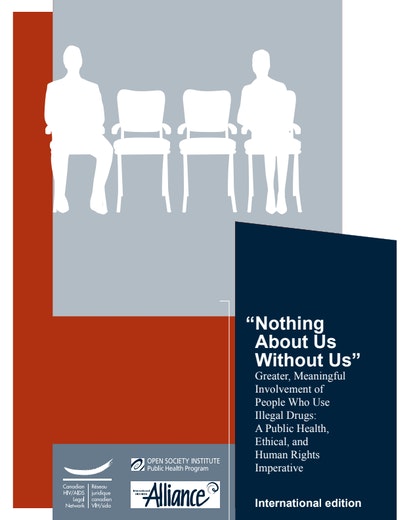 While facing severe marginalization and discrimination that has resulted in epidemics of HIV and hepatitis C, millions of people who use illegal drugs remain largely unrepresented when decisions are made about how to respond to health and other concerns. "Nothing About Us Without Us"—Greater, Meaningful Involvement of People Who Use Illegal Drugs: A Public Health, Ethical, and Human Rights Imperative, examines why it is important to increase meaningful involvement of people who use (or have used) illegal drugs in the response to HIV and HCV, and explores how this can be done.

Two new editions of the report—an international version now available in English, and a Russian language edition focusing on Eastern Europe and Central Asia—were prepared through a consultation process involving hundreds of drug user activists. Though both editions contain new content, they are based on a similar project by the Canadian HIV/AIDS Legal Network in 2005 in Canada, which was funded by the Public Health Agency of Canada.

The reports also include a Manifesto prepared by people who use drugs and endorsed by the International Network of People Who Use Drugs. The Manifesto is a declaration affirming that people who use drugs have a say in decisions affecting their lives, and lists a set of demands, including recognition, funding, support, and involvement in efforts on behalf of drug users.

"Nothing About Us Without Us" is jointly published by the Canadian HIV/AIDS Legal Network, the International HIV/AIDS Alliance, and the Open Society Institute, with additional financial support from the government of Canada through the Canadian International Development Agency.