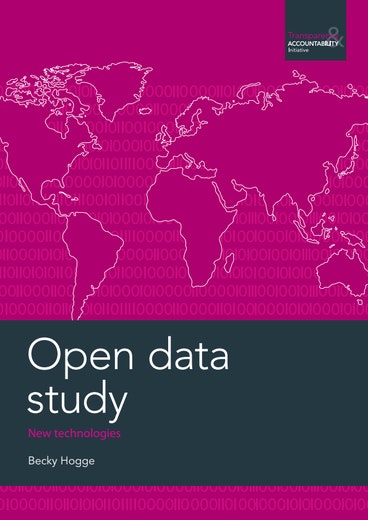 Substantial social and economic gains can be made from opening government data to the public. The combination of geographic, budget, demographic, services, education, and other data, publicly available in an open format on the web, promises to improve services as well as create future economic growth.

This approach has been recently pioneered by governments in the United States and the United Kingdom (with the launch of two web portals, www.data.gov and www.data.gov.uk respectively) inspired in part by applications developed by grassroots civil society organizations ranging from bicycle accidents maps to sites breaking down how and where tax money is spent. In the UK, the data.gov.uk initiative was spearheaded by Tim Berners-Lee, the inventor of the World Wide Web.

This research, commissioned by a consortium of funders and NGOs (including the Information Program) under the umbrella of the Transparency and Accountability Initiative, seeks to explore the feasibility of applying this approach to open data in relevant middle income and developing countries. Its aim is to identify the strategies used in the U.S. and U.K. contexts with a view to building a set of criteria to guide the selection of pilot countries, which in turn suggests a template strategy to open government data.

The report finds that in both the U.S. and U.K., a three-tiered drive was at play. The three groups of actors who were crucial to the projects' success were:

Based on these findings, and on interviews conducted with a selection of domain and region experts to refine these observations for a developing and middle-income country context (where a fourth tier of potential drivers towards open data—in the shape of international aid donors—is identified) the report presents a list of criteria to be considered when selecting a pilot country in order to test this strategy.

What do architects, designers, and weapons specialists have to offer rights movements around the world? A unique and trailblazing firm is providing an answer, while building new digital tools to resist authoritarianism.