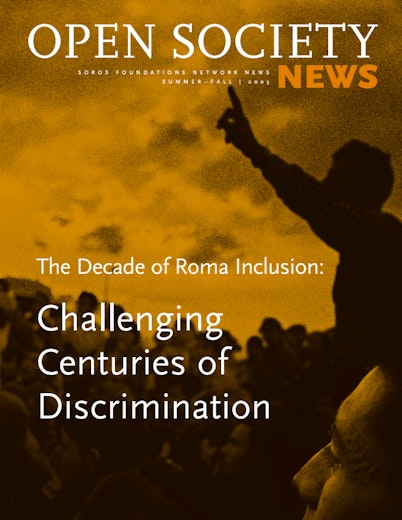 This issue of Open Society News provides snapshots of where Europe's Romani communities stand in 2005—a potential watershed year for efforts to provide basic rights and social justice for the Roma. It covers some of OSI's continuing efforts to advance Romani rights and provides an overview of the recently launched Decade of Roma Inclusion. A number of stories go beyond OSI and the Decade to explore the question of Romani identity and the challenges that integration can pose.

Until her retirement in March of this year, OSI Vice President Deborah Harding was the guiding force behind OSI's Roma programs. While she will continue to be involved in Romani issues as a board member of the European Roma Rights Centre, her invaluable role in supporting Romani activists and in shepherding OSI's Roma programs will be long remembered and sorely missed. As Roma and their allies enter a new era of activism marked by the establishment of the Decade, OSI has established the Office of Roma Initiatives under the leadership of Andre Wilkens and Iulius Rostas.

In their introductory overview, Wilkens and Rostas summarize OSI's programs and advocacy for Roma and how they can inform the Decade. An interview with Romani activist Nicoleta Bitu discusses the role of Romani women's issues in the Decade and in the Romani community at large. Another article takes readers inside a Romani enclave in Bulgaria to examine the challenges and opportunities that come with integration, and stories from Hungary and the Czech Republic show how two landmark antidiscrimination cases could transform the social and political landscape in the region. The issue concludes with an account from European Roma Rights Centre Director Dimitrina Petrova highlighting the often overlooked plight of Romani communities in Putin's Russia.

These stories and others describe some of the issues and aspirations that are important to the Roma as they begin a decade that could finally lead to their acceptance in societies throughout Europe.