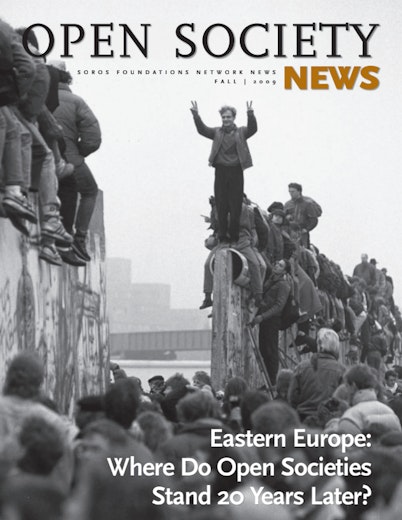 The stories in this issue of Open Society News serve as reminders of the frenetic energy and excitement that filled people as communism in Europe fell apart. Annette Laborey's adventures behind the Iron Curtain and Sergei Kovalev’s efforts to advance human rights in communist Russia serve as vindications of years of patient and often dangerous work. The speed with which communism collapsed in many countries was matched by the speed with which new institutions took its place. George Soros himself was swept up by the change, establishing 18 new foundations in the region between 1989 and 1992.

There is no doubt that the collapse of communism and the fall of the Berlin Wall marked the unleashing of a vast amount of human creativity and potential as people took advantage of new political freedoms and new economic opportunities. Vaclav Havel notes that he is constantly amazed by how much ingenuity had slumbered within people.

But the changes also brought unseen levels of greed and poverty, new forms of corruption, and, as Slavenka Drakulic highlights, confusion and alienation as people struggled to redefine their roles and responsibilities within a quickly changing social order.

After two decades of transition, Central and Eastern Europe and parts of the former Soviet Union have been transformed for the better. But as George Soros and Aryeh Neier both note, the change has been uneven and, in some areas and on some issues, there has been stagnation and setback. The collapse of communism has been a boon for open society but has also fostered a host of new challenges that we must continue to address.