Pluralism and Freedom of the Media in Europe 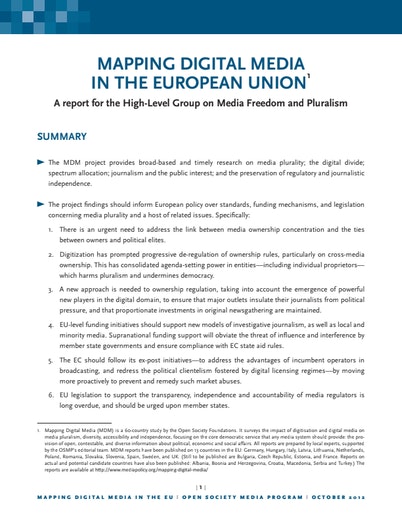 Media pluralism is currently the focus of unprecedented attention in the European Union (EU). An EU High-Level Group on Media Freedom and Pluralism is due to report in January 2013 to Vice President of the European Commission Neelie Kroes, with recommendations for strengthening “pluralism and freedom of the media in Europe.” Meanwhile, the European Parliament’s Committee on Civil Liberties, Justice and Home Affairs—known as LIBE—is preparing a report on media standard-setting in the EU, which calls for the Commission and the member states to “respect, guarantee, protect, and promote the fundamental right to freedom of expression and information.”

Drawing on the extensive findings of the Mapping Digital Media research into digitization and new media, the Open Society Foundations submitted reports to the High-Level Group and LIBE: