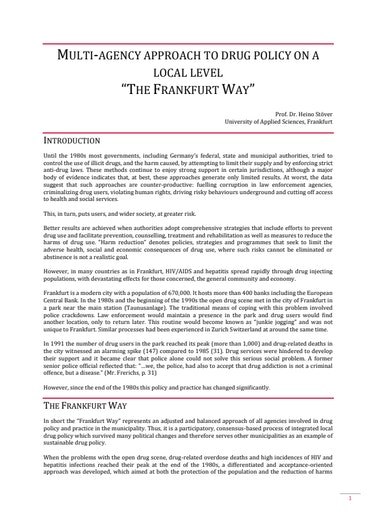 However, rather than doubling down on a failed strategy, leaders in Frankfurt engaged multiple stakeholders in order to balance the city's approach to drugs. Repressive means were directed toward the traffic of illicit drugs, not against drug dependent people and the communities they lived in. What repressive measures were used were closely connected with health and social services for drug users. The actions initiated from 1992 onwards resulted not only in a decline of drug–related deaths—from 147 in 1991 to low-twenties in recent years—but also to a decrease in crime. This paper tells the story of the “Frankfurt Way” and describes how the city made life better for everyone.

This paper was produced for the 2013 International Conference on Drug Policy and Policing in Frankfurt Germany. The conference, which was supported by the Open Society Foundations, brought together high-level police officials from around the world in order to discuss innovative and effective drug law enforcement strategies in the world.