Populism in Europe: CasaPound in Italy 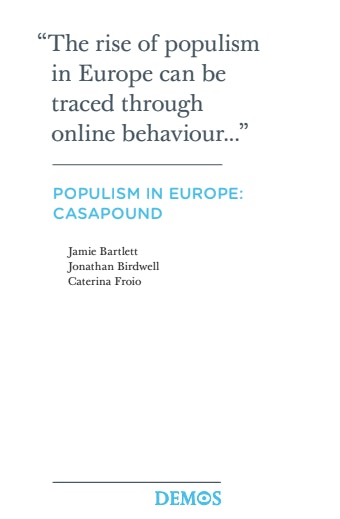 Nationalist populist parties and movements are growing in support throughout Europe. These groups are known for their opposition to immigration, their “anti-establishment” views and their concern with protecting national culture. Their rise in popularity has gone hand-in-hand with the advent of social media, and they are adept at using new technology to amplify their message, recruit and organize.

One of the most difficult to classify of these groups is the neo-fascist political and cultural movement CasaPound. CasaPound emphasizes modes of direct activism (for example, organising street protests, demonstrative actions, political campaigns and street marches) over more formal methods of political engagement. Unlike other far-right movements and parties in Europe for which immigration is the key issue, CasaPound’s policy positions cover a range of economic and social areas with its primary concern being the “housing right” for Italian citizens.

This report presents the results of a survey of Facebook fans of CasaPound. It includes data on who they are, what they think, and what motivates them to shift from virtual to real-world activism. It also compares them with other similar parties in Western Europe, shedding light on their growing online support, and the relationship between their online and offline activities. This report is the sixth in a series of country specific briefings about the online support of populist parties in 12 European countries, based on a survey of 13,000 Facebook fans of these groups.