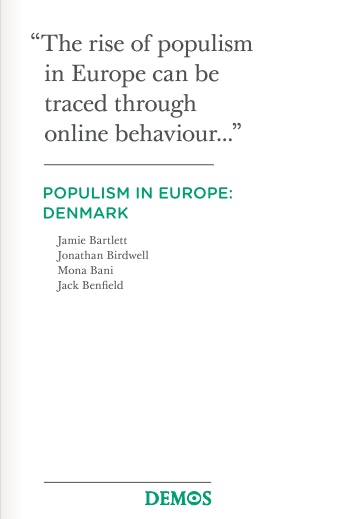 Nationalist populist parties and movements are growing in support throughout Europe. These groups are known for their opposition to immigration, their "anti-establishment" views and their concern for protecting national culture. Their rise in popularity has gone hand-in-hand with the advent of social media, and they are adept at using new technology to amplify their message, recruit, and organize.

The Dansk Folkeparti (Danish People’s Party, DPP) is one of the most successful of these groups in Western Europe. It is the third largest party in Denmark and was a member of the coalition government from 2002 until 2011. The DPP’s policies relate primarily to the protection of Danish identity and heritage, with particular focus on limiting immigration and rejecting multiculturalism, publicly stating that a multi-ethnic Danish society would be a "national disaster." Their attitude was crystallized during the scandal following the publication of cartoons of the prophet Mohammed—they openly supported the move as an example of free speech.

This report presents the results of a survey of Facebook fans of the Danish People’s Party. It includes data on who they are, what they think, and what motivates them to shift from virtual to real-world activism. It also compares them with other similar parties in Western Europe, shedding light on their growing online support, and the relationship between their online and offline activities.

Populism in Europe: Denmark is the third in a series of country briefing papers released in 2012 about the online support of populist political parties and street-based groups in Europe. These papers are based on a dataset of approximately 13,000 Facebook supporters of these "nationalist populist" parties in 12 European countries, which was published in the Demos report, The New Face of Digital Populism, in November 2011. The first report Populism in Europe: Hungary was published in January 2012 and Populism in Europe: Sweden in February 2012. Reports on France, Germany, the Netherlands, Finland, Norway, Italy and Belgium will follow.

Populism in Europe: Denmark was launched in a public discussion in Copenhagen jointly with the Swedish think tank CEVEA.

Grilling the Mainstream? The Rise of Beppe Grillo’s Movimento 5 Stelle

Beppe Grillo’s Movimento 5 Stelle enjoyed a meteoric rise in popularity in Italy. Could the appeal of movements like M5S—who combine an anti-establishment rhetoric with smart ways of using modern media—grow across Europe?

CasaPound: The New Face of Fascism?

Online supporters of the Italian CasaPound differ from supporters of similar populist groups across Europe with higher levels of concern for economic issues and corruption.

Social Media and the Rise of the Far Right in Sweden