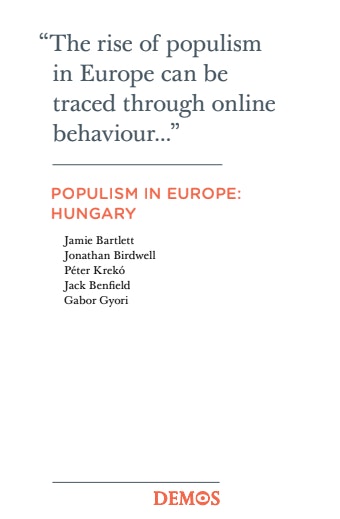 Nationalist populist parties are growing in strength across Europe. In Hungary, Jobbik (Jobbik Magyarországért Mozgalom, Movement for a Better Hungary), is the most successful far-right political party following the Cold War. Founded in 2003, it is now the third largest political party in Hungary. Its ideology is strongly nationalistic, combining opposition to capitalism and liberalism, with anti-Semitic and anti-Roma rhetoric. The Jobbik party has been particularly effective at mobilizing young Hungarians and using online communication and messages to amplify its message, recruit new members and organize.

Jobbik's Facebook following is greater than its official membership list. This report by the UK think tank Demos and the Hungarian think tank Political Capital presents the results of a survey of over 2,000 Facebook fans of Jobbik. It includes data on who they are, what they think, and what motivates them to shift from virtual to real-world activism. The report finds that identity and the protection thereof are key drivers of support for Jobbik. It also suggests that the party should not be grouped together with other nationalist populist parties in Western Europe. While there are obvious similarities, the demographics, concerns and attitudes of Jobbik supporters—as well as the Hungarian context—differ in significant ways.

Populism in Europe: Hungary is the first in a series of briefing papers that will be released in 2012 about the online support of populist political parties and street-based groups in Europe. They are based on a data set of 13,000 Facebook fans of populist parties in 12 European countries, which was first presented in the Demos report The New Face of Digital Populism, released in November 2011.