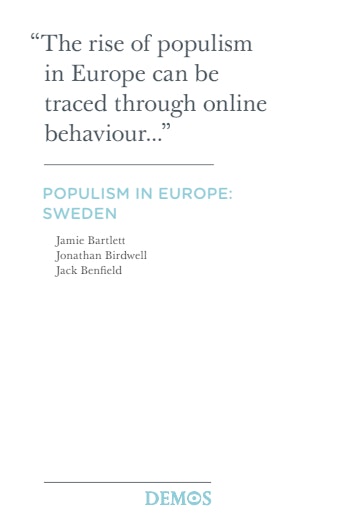 The UK think tank Demos polled Facebook supporters of the Sweden Democrats, Sweden’s far-right populist party who entered national parliament for the first time in Swedish history in 2010. The poll’s results showed that its online supporters are particularly young compared to the European average, with two-thirds being between 16 and 20 years old. Overall, 63 percent of them voted for the party in the last elections, which is a very high number considering how many of them have not yet reached the age to vote.

But the results also show that there is a way of engaging them. Sweden Democrats’ Facebook supporters believe that politics is an effective way to address their concerns. Despite having low trust  in a range of other important social institutions—such as  the government, the press, and religious institutions—Sweden Democrats supporters are almost equally as likely to trust political parties as the Swedish population in general. Sweden’s mainstream political parties must build on these positives by engaging their supporters online and trying to lure them back into the mainstream, recommends the report.

Populism in Europe: Sweden is the second in a series of country briefing papers released in 2012 about the online support of populist political parties and street-based groups in Europe. These papers are based on a dataset of approximately 13,000 Facebook supporters of these “nationalist populist” parties in 12 European countries, which was published in the Demos report, The New Face of Digital Populism, in November 2011. The first report, Populism in Europe: Hungary, was published in January 2012. Reports on France, Germany, the Netherlands, Denmark, Finland, Norway, Italy, and Belgium will follow.

The reports are part of an Open Society Foundations initiative conducting research and pilot projects tackling innovative approaches to keeping societies open in Europe. Populism in Europe: Sweden was launched in a public discussion in Stockholm jointly with the Swedish think tank Fores.

The government of Italy’s COVID-19 stimulus proposal includes measures to protect migrant laborers working in some of the country’s most important industries. While this is welcome news, more is needed.

Q&A: Forging a Bond between Locals and Refugees

The Greek island of Lesvos remains at the frontlines of refugee arrivals to Europe. Currently, more than 21,000 refugees are held there. A grassroots group called the Starfish Foundation is working to improve the lives of locals and refugees.