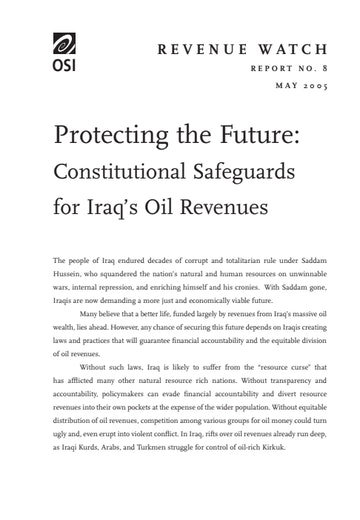 Published by the Open Society Iraq Revenue Watch, the following report argues that Iraq's future peace and security depend on instituting constitutional safeguards guaranteeing financial accountability and the equitable division of oil revenues.

Protecting the Future: Constitutional Safeguards for Iraq's Oil Revenues comes as the new Iraqi government prepares to draft the country's first permanent constitution since Saddam Hussein was ousted. The report urges lawmakers to protect against oil-sector corruption and mismanagement.

Protecting the Future also warns of civil conflict unless oil revenues are fairly distributed among Iraq's ethnic and religious groups. In Iraq, rifts over oil revenues run deep, as Iraqi Kurds, Arabs, and Turkmen struggle for control of oil-rich Kirkuk.

Without constitutional provisions that protect its oil revenues, Iraq is likely to follow the path of so many other natural resource-rich nations that are dogged by corruption and bad governance. Most oil-dependent states have “ultra-presidential” governments, which enable the executive branch to use resource revenues as it sees fit.

Protecting the Future explores ways that Iraq can avoid this trap by embedding measures for accountability into the future Iraqi constitution. The report recommends provisions that make clear which agencies are responsible for the development and implementation of the Iraqi budget, and grant oversight of oil revenues to all branches of government—executive, legislative, and judicial.