Raised on the Registry: The Irreparable Harm of Placing Children on Sex Offender Registries in the U.S. 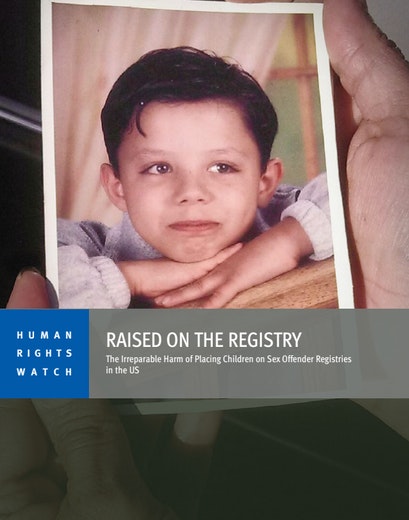 Throughout the United States, children who are adjudicated delinquent for sexual offenses must comply with a complex and onerous array of legal requirements that apply to all individuals convicted of sexual offenses, regardless of age. Upon release from juvenile detention or prison, these young people are subject to registration laws that require them to continually update and disclose personal information, including a current photograph, height, weight, age, current address, school attendance, and place of employment. Registrants must update this information so that it remains current in each jurisdiction in which they reside, work, or attend school. Often, the requirement to register lasts for decades and even a lifetime, and failure to adhere to registration, community notification, or residency restriction laws can lead to a felony conviction for failure to register, with lasting consequences for a young person’s life.

The harm befalling young people placed on registries can be devastating. They experience severe psychological harm. They are stigmatized, isolated, and depressed. Many consider suicide, and some do ultimately end their lives. Children on the registry are sometimes denied access to education because residency restriction laws prevent them from being in or near a school; these youth often despair of ever finding employment, even while they are burdened with mandatory fees related to registration that can reach into the hundreds of dollars on an annual basis. Young registrants often cannot find housing that meets residency restriction rules, and so they and their families often experience periods of homelessness. Families of children on the registry also confront enormous obstacles in living together as a family—often because registrants are prohibited from living with other children.

Finally, the impacts of being a young person subject to registration are multi-generational—affecting their parents, and later in life, their children and partners. The children of people placed on registries as children often cannot be dropped off at school by their parent, may be banned by law from hosting a birthday party involving other children at their home, and they are often harassed and ridiculed by their peers for their parents’ long-past transgressions.

Federal and state laws on sex offender registration and notification fail to take into account fundamental differences between children and adults. These include not only differences in cognitive capacity, which affect their culpability, but also differences in their amenability to rehabilitation, in the nature of their sexual behaviors and offenses and in the likelihood that they will reoffend. Indeed, there is no scientific foundation for the belief that children who are convicted of sexual offenses pose any danger of future sexual offending. Once detected, most adolescents who have engaged in sexually offensive behavior do not continue to engage in these behaviors. And contrary to common public perceptions, empirical evidence suggests that putting young people on registries does not advance community safety but instead overburdens law enforcement with large numbers of people to monitor, undifferentiated by their risk of recidivism.

This report challenges the view that registration laws and related restrictions are an appropriate response for children convicted of sexual offenses. While the law does not formally recognize registration as a punishment, Nicole Pittman and Human Rights Watch’s report illustrates through the stories of directly impacted individuals the irreparable harm done to young people subject to these policies and their loved ones.

Experts discuss the shared experiences and challenges of Afro Brazilians and Afro Americans.

Angela J. Davis on the Overpolicing of Black Men

Davis discusses a new collection of essays on the impact of the criminal justice system on African American males.

How Black Lawmakers Hurt the African American Community in the 1970s