The Real Cost of Turkmenistan’s Hydrocarbons 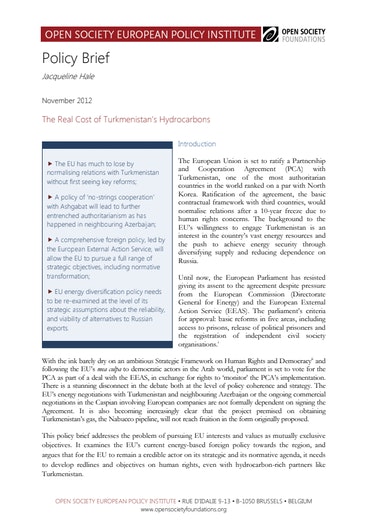 The European Union is set to ratify a Partnership and Cooperation Agreement (PCA) with Turkmenistan, one of the most authoritarian countries in the world. This would normalise relations after a 10-year freeze due to human rights concerns. The EU’s interest in Turkmenistan’s energy resources is part of its strategy to diversify its energy supply and reduce dependency on Russia. Yet there are serious questions about the strategic assumptions behind this move given Turkmenistan’s unreliable and authoritarian nature, as well as grave doubts about the political and commercial viability of projects to bring Turkmen gas to Europe.

This policy brief assesses both the strategic and normative assumptions behind EU decision-making in the Caspian, including the “away from Russia” narrative. It argues that a policy of no-strings cooperation with Ashgabat based on energy promises will not only lead to further authoritarianism but is unstrategic, as it undermines the EU’s leverage and its credibility on its normative agenda. Taking lessons from the Arab Spring, the EU should pursue values and interests as part of a comprehensive approach to hydrocarbon partners. The European Parliament should hold off from ratifying the agreement until Turkmenistan undertakes key reforms including allowing international observers access to monitor Turkmenistan’s prisons, releasing political prisoners and prisoners of conscience, allowing independent NGOs to operate and abolishing a government travel ban.

The Real Cost of Doing Business with Turkmenistan

Turkmenistan has large gas reserves and a shoddy human rights record. Does the European Union stand to gain or lose by engaging with this country?