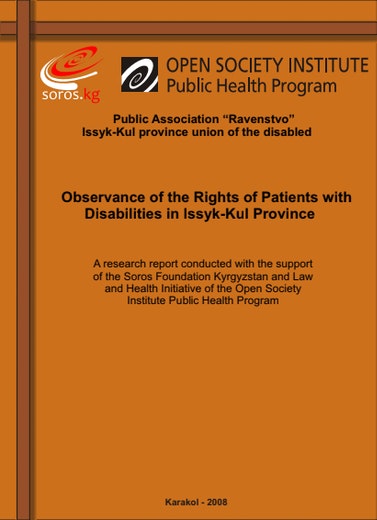 In a groundbreaking review of patients’ rights in Kyrgyzstan, four reports supported by OSI reveal shocking evidence of widespread human rights violations and abuses in hospitals and clinics throughout the country.

The reports are based on firsthand research conducted by Kyrgyz organizations working with marginalized members of society, including people with physical and mental disabilities, sex workers, and people who use drugs.

Investigations conducted in Bishkek, Osh, Jalal-Abad, and Issyk-Kul provinces revealed that medical workers at hospitals and clinics often deny medical care to people in need, insult people from socially marginalized groups, and fail to provide the quality of care necessary to ensure good health. At the same time, medical workers themselves are struggling to survive on low wages and working in difficult circumstances, with a lack of medicine and other necessary supplies.

A report produced by Ravenstvo, a group working with people with physical disabilities in Issyk-Kul province, uncovered shocking cases of abuse of disabled patients, including forced sterilization of women. One 33-year-old woman with a spinal injury was sterilized by her doctor after she had given birth to a healthy child. The medical staff had not asked for her permission and the woman did not realize she had been sterilized until several months later.

In a report by the group Aman Plus, widespread discrimination was found by medical staff against people who use drugs. In one instance, a doctor in Bishkek refused to treat a woman with a serious leg infection, dismissing her as a "drug addict." The woman was admitted to the hospital only after a local organization advocated on her behalf. A physician interviewed for the report told Aman Plus that drug users should be euthanized.

A third report by the organization Musaada found that emergency workers discriminate in their decisions about whom to help. In many cases, emergency services refuse to send ambulances to respond to calls about overdoses, which are often fatal if left untreated. When sex workers call for emergency treatment, ambulances come late or demand extra payment for medical services that are supposed to be free.

The fourth report, produced by the group Diaron, found that doctors routinely fail to inform patients with mental disabilities about their medical conditions or discuss options for treatment. Medical personnel almost never talk to them about their rights as patients. The report includes recommendations for the government of Kyrgyzstan, including taking action to ensure that patients are informed about their rights.

“These reports paint a picture of an unaccountable health care system where disturbing abuses against members of vulnerable groups are allowed to go unchecked,” said Jonathan Cohen, director of the Public Health Program's Law and Health Initiative. “Health systems should be places where human rights are fulfilled, not violated."

When a key funder pulled back, many advocates for people in Macedonia with HIV feared the worst. But thanks to a mix of grassroots advocacy and targeted political outreach, the fight against the epidemic continues.

The Trump administration’s proposed cuts for programs devoted to fighting this disease would cost innocent lives as well as U.S. global influence.

Public Health in the Trump Era