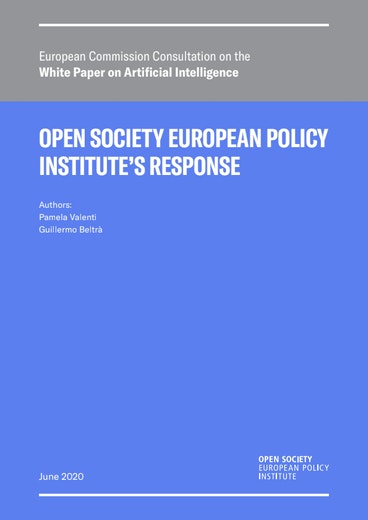 In June 2020, the Open Society European Policy Institute submitted a response to the public consultation launched by the European Commission to gather feedback and ideas on the White Paper on Artificial Intelligence—A European Approach to Excellence and Trust [PDF]. The consultation will influence a new EU regulatory framework on automated decision-making systems that the Commission has committed to publish in early 2021.

The submission was developed in collaboration with different parts of the Open Society Foundations. It underlines the need to prioritize a model of artificial intelligence governance that safeguards human rights and counters all forms of discrimination. The submission argues against the white paper’s plan to regulate exclusively for so-called high-risk scenarios. It argues that it will be necessary to legislate for a larger scope of the law and, in some cases, prohibit the use of artificial intelligence in highly sensitive public functions, such as policing, surveillance, immigration, and social welfare.

The submission also recommends that public institutions, from local to European Union level, establish public registers of automated decision-making systems used in the public sector. Further, the submission counsels these same institutions to set up concrete mechanisms and dedicated funding programs to ensure that racialized and at-risk groups are meaningfully involved and represented in all policymaking decisions aimed at governing technology.

This publication features recommendations for European Union action on competition in digital markets, content governance, protection of fundamental rights online, and to guarantee an oversight and enforcement architecture.

This publication is a collection of recommendations for EU action on election integrity and online political advertising, countering disinformation, media freedom and media pluralism, supporting civil society, and active citizenship.