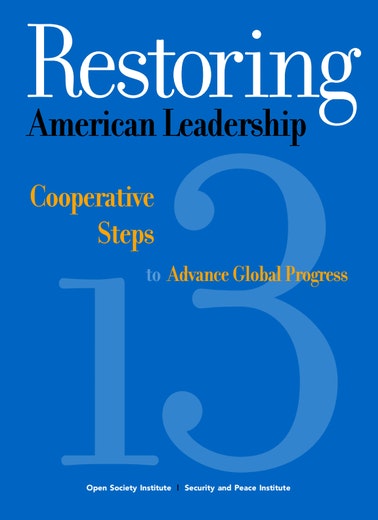 Cosponsored by the Open Society Foundations and the Security and Peace Institute (a joint program of the Center for American Progress and The Century Foundation), Restoring American Leadership: 13 Cooperative Steps to Advance Social Progress offers a starting point for restoring America's international alliances. The papers in the report, written by experts in 13 fields, recommend how President George W. Bush can make progress in areas where his personal commitment to action is needed and where global alliances can help strengthen the national security goals of the United States.

Restoring American Leadership covers a wide range of topics, from international cooperation in the war on terror, to curbing proliferation of nuclear weapons, to advancing the rights of women across the globe. Each paper offers a specific set of recommendations for executive action by the president consistent with his stated values, as well as a brief overview of the administration's position on the issue to date.