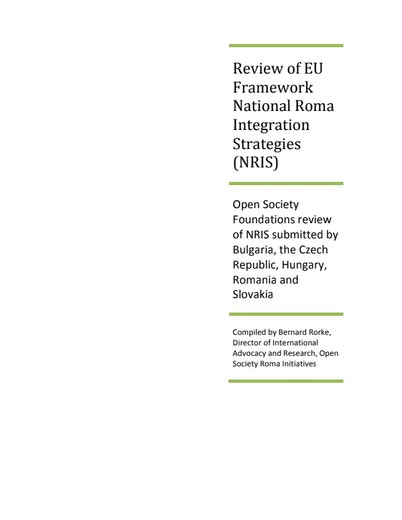 All these countries were founding members of the Decade of Roma Inclusion 2005–2015. At the launch of the Decade in Sofia in 2005, the prime ministers of participating countries pledged that their governments would work toward eliminating discrimination and closing the unacceptable gaps between Roma and the rest of society; develop National Action Plans in the four key priority areas of health, housing, employment, and education; and demonstrate progress by measuring outcomes in implementation.

In theory, these five countries were best placed among Member States to meet all the European Commission’s requests. In practice, it is clear that much more is needed to meet the Commission’s ambition “to make a difference by 2020.”

The Open Society Foundations supported civil society dialogue and advocacy in each of these five countries. Governments’ openness to consultation and dialogue was encouraging, but if these strategies are intended to make a tangible difference to the lives of millions by 2020, it is clear that the conversation has just begun.