On the Road to the EU: Monitoring Equal Opportunities for Women and Men in Albania 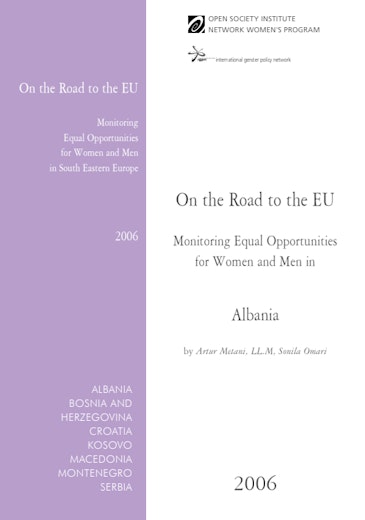 Albania is preparing for eventual EU membership and is in the midst of bringing its legal framework in compliance with the requirements of EU directives and guidelines. In regard to gender equality, Albanian legislation has generally met priorities established in the Stabilization and Association Process (SAP) with the European Union. However, as the following report details, implementation of these laws faces major hurdles.

In recent years, significant progress has been made in developing national legislation to promote the protection of women’s rights as basic human rights, and foster equality between women and men in the economy and in public life. The Albanian government has endorsed this equality by enacting the appropriate legislation, giving women equal rights and obligations with men. However, the absence of political mechanisms to effectively enforce the new laws has actually increased gender inequality, which directly impairs the process of economic development, democratization, and political stability. Without effective enforcement, gender stereotypes and traditional mentalities preserve the structural inequalities between women and men and unequal power relations between them.

The complete Albania report, as well as a fact sheet addressing the specific situation of Romani women, are available for download.

Q&A: How Migrant Women in the UK Are Joining Together in the Era of COVID-19

Few people in Britain have been more upended by the pandemic than migrant women. Thankfully, grassroots organizations like the Latin American Women’s Rights Service are helping this community find solidarity and strength.