On the Road to the EU: Monitoring Equal Opportunities for Women and Men in Croatia 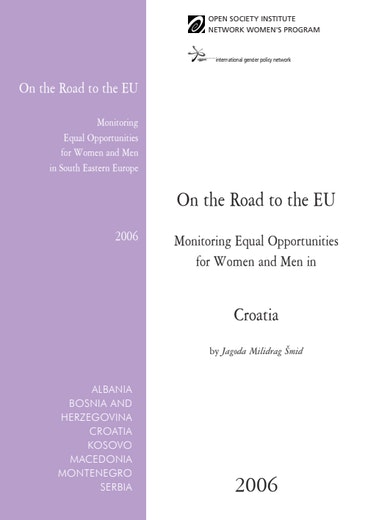 The effects on Croatian women of Croatia’s economic, legal, and institutional transformation in the early 1990s could be metaphorically described as follows: The Berlin wall had fallen on the heads of Croatian women.

The results of the first multiparty parliamentary elections were devastating for women: only 4.8 percent of the candidates elected to Croatia's House of Representatives were women. It was not until the 2000 elections, which brought a new political party in power, that women's representation in the Croatian Parliament significantly increased—to 21 percent. At present, a third of all ministers are women, a woman serves as deputy prime minister in the Croatian government (there were no women in Cabinet positions in the early 1990s). Although women remain a political minority in Croatia, they are now more visible in the public and political sphere.

This accomplishment is the result of long years of struggle and organized pressure exercised by women. In response to challenges of the transition period—which was in part characterized by a strong tendency towards returning women to their traditional roles in family and social life—Croatian women organized themselves, founded NGOs and women's sections within trade unions, and sought and developed strategies in their struggle for equality, as well as a new definition of traditional women's roles. Owing to the struggle and persistence of these women, the political culture and social climate are slowly changing, the public has been sensitized to discrimination against women, social awareness of the necessity of change and the need to develop an adequate legal and institutional network has increased, the media are more open to women’s issues, and the harmonization of Croatia's legal order with European Union legislation is currently underway.

Despite such rapid and almost daily change, the patriarchal status quo, the cultural pattern, and attitudes towards the role of women and social practice that reflects it remains stubbornly persistent. The dominant attitude that woman's natural place is primarily in the home and with their family is often mirrored in the media and school textbooks. Young women are faced with societal demands to simultaneously fulfill the socially desirable role of the mother and of a competent, efficient and productive worker. The result is an unfavorable position for women in the labor market, where employers often regard them as undesirable workers because of their expected family duties.

Croatia lacks public policies that would alleviate the situation of families with employed members, help balance out family and professional obligations, enable a reintegration of women into the professional world after their absence from the labor market, and so on. In short, despite clear progress over the past few years, especially in the establishment of the legal and institutional framework, there is a great deal of hard work to be done in order to revive the proclaimed values of gender equality.

The complete Croatia report, as well as a fact sheet addressing the specific situation of Romani women, are available for download.