On the Road to the EU: Monitoring Equal Opportunities for Women and Men in Macedonia 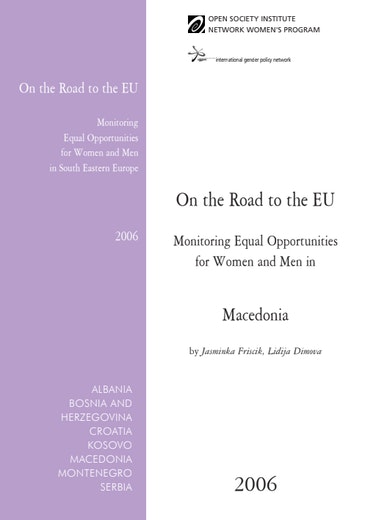 An important part of European integration is harmonizing Macedonian legislation with that of the EU. From the EU directives concerning gender equality, the government of the Republic of Macedonia has incorporated those addressing the issues of equal pay and equal treatment of women and men. The other EU directives in question are at different stages of the same process: some are in the translation phase, and some have already been submitted to the appropriate ministries.

Whether Macedonia will make full use of opportunities offered by the European Union remains to be seen. Whether the government will develop a strategy to increase the absorption capacity of the country and accelerate the reforms is also open to question. The responsibility, however, lies with both sides.

This report is one of a seven-part series, "On the Road to the EU," prepared as part of the OSI Network Women's Program's “Bringing the EU Home” Project. This three-year project aims to promote awareness, advocacy, and enforcement of equal opportunity legislation at the national level and to build the capacity of national actors in civil society to use EU-level gender equality mechanisms effectively. The project further aims to help increase the importance of equal opportunities on the European agenda.

The complete Macedonia report, as well as a fact sheet addressing the specific situation of Romani women, are available for download.

The Fight to Reclaim Housing Rights as European Human Rights

What use is a booming economy if you cannot find a place to live? A little-known EU charter can help re-establish housing as a human right.