On the Road to the EU: Monitoring Equal Opportunities for Women and Men in Montenegro 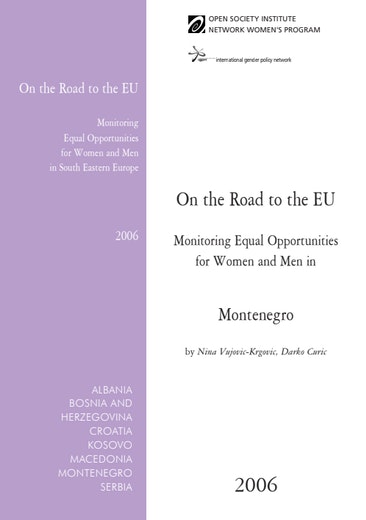 The existing legal framework in Montenegro does not provide sufficient protection from gender-based discrimination in the labor market, according to this OSI Network Women's Program report. Likewise protection of women's human rights is still very far from being either a well-known concept or practice, the only exception being a recent criminal code recodification recognizing family violence. There is still a great deal of work to be done in terms of gender equity legislation and its enforcement, including awareness raising vis-à-vis the principles of equality between women and men.

Montenegro is a country where traditional societal roles and gender stereotypes continue to persist, yet the government has taken steps in the right direction. Preparatory work has commenced to draft several legal texts related to equal treatment, reflecting an intention on the part of the government to fulfill and implement the standards required by EU integration.

The complete Montenegro report, as well as a fact sheet addressing the specific situation of Romani women, are available for download.