On the Road to the EU: Monitoring Equal Opportunities for Women and Men in Serbia 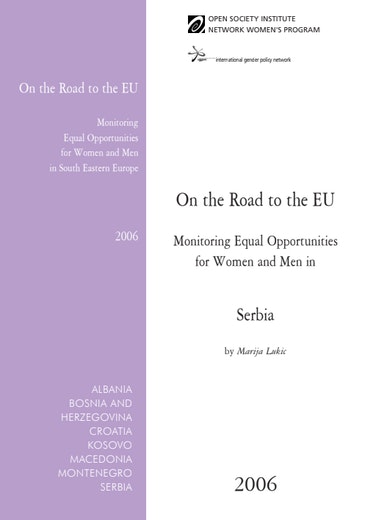 Currently Serbia is a diverse community with no social consensus on the majority of war crimes-related issues, as well as racism, homophobia, and gender equality. The conflict in values, ideologies, and goals is intense and persistent. At the same time, poverty, social exclusion, and violence are predominant characteristics, a way of life for marginalized groups, including women.

One of the rare issues where consensus has emerged is a strong sense of affiliation and orientation towards the European Union (EU). To date, the EU has played an important if not crucial role in political and public rhetoric, although there remains an ostensible rift between the values it espouses and those that currently obtain in Serbia.

Serbia’s parliament has enacted some important legislation vis-à-vis the state’s responsibility to protect political, social, and other human rights. Some gender-equality mechanisms have been introduced, but randomly funded. New institutions generally lack the requisite authority to stop and prevent discriminatory practices by those who violate other's rights or abuse their own power.

The complete Serbia report, as well as a fact sheet addressing the specific situation of Romani women, are available for download.