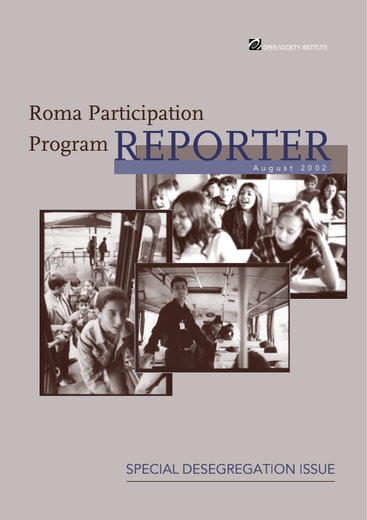 The deleterious effects on Roma communities of educational segregation across Central and Eastern Europe have been exhaustively documented. As long as Romani children are classified as mentally handicapped and sent to special schools, or placed in "gypsy schools" situated in Roma ghettos, talk of integration amounts to nothing more than hollow rhetoric.

This issue of the Roma Participation Program Reporter includes a detailed case study by Evgeni Evgeniev of the "Vidin Model," the most widely publicized of the desegregation projects launched in Bulgaria. Also included is a brief report on the role played by Roma Participation Program (RPP) grantees in Hungary in securing firm commitments from the newly elected government to accelerate the process of Roma integration. If implemented, these policy initiatives could prove to be among the most substantial ever undertaken by a government to address the situation of the Roma.

This issue also contains the text of RPP Director Rumyan Russinov's address to the United States Commission on Security and Cooperation in Europe and a speech delivered by Deputy Director Bernard Rorke at the Conference of European Ombudsmen in Vilnius, Lithuania.