ScholarForum: The Struggle for Democracy 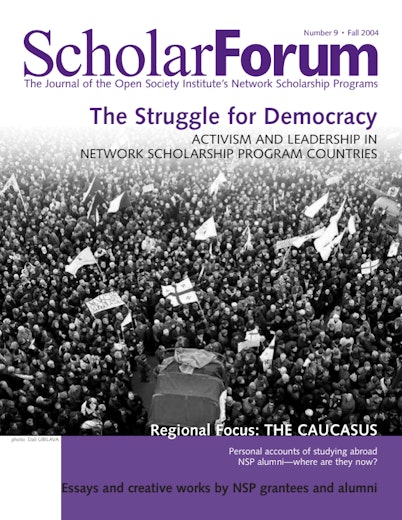 This issue of ScholarForum pairs the topic "The Struggle for Democracy" with a regional focus on the Caucasus. Because this theme coincided with Georgia's Rose Revolution, a large number of responses were received from NSP scholars and alumni who had witnessed the event firsthand, or who were inspired to share their ideas on the prospects for democracy in their own countries.

Contributions to this issue include essays, stories, and photographs that capture the emotions and excitement of the heady days of revolution. Other respondents recalled protests and strikes in which they participated against governments and university administrations, or ruminated on the meaning and effectiveness of group action against injustice.

Georgi Kandelaki's essay is a very personal account of the revolution in Georgia. Dali Ubilava writes of her efforts to bridge ethnic conflict through the films she creates, while Pavol Kohut considers the effect art can have on stirring people to action.