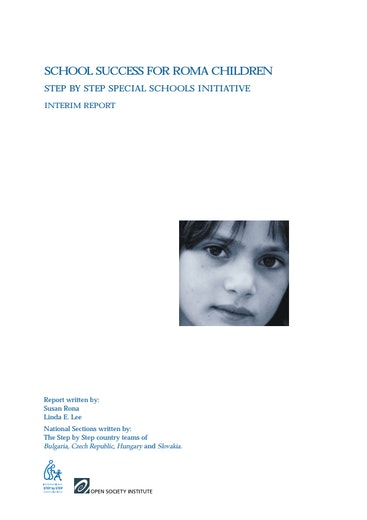 Roma children experience little success in schools in Central and Eastern Europe. While much research has examined the socioeconomic conditions that contribute to their academic failure, very few models of successful education have been created. The Step by Step Roma Special Schools Initiative developed and tested a model that focuses on creating conditions that foster educational success for Roma children.

The project operates under the auspices of the national Step by Step NGO's that are all members of ISSA, the International Step by Step Association. An international coordinating team works with national teams to support and monitor project implementation. The project is based on the conviction that Roma children are mislabeled "mentally handicapped" and misplaced in special education. Our hypothesis was that, given appropriate conditions for learning, the majority of Roma children are capable of academic achievement to the level of mainstream curriculum standards. Proactive Information Services Inc., an educational evaluation company whose clients include ministries of education throughout Canada, was contracted to provide an independent test of the project's hypothesis and to lead a team of national researchers. Distinguished researchers from each country collected and analyzed additional data required by their national ministries of education.