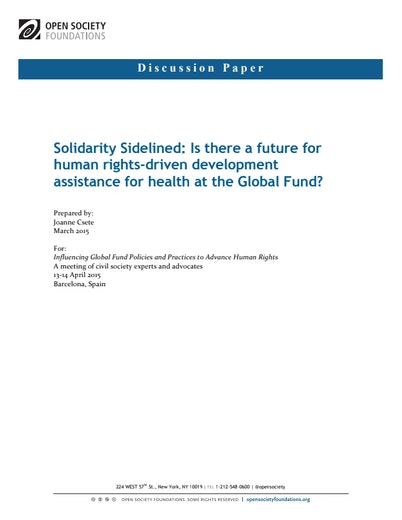 As the Global Fund to Fight AIDS, Tuberculosis, and Malaria embarks on a new strategy, it must take care to avoid measures that are inconsistent with both its stated objectives and the history of human rights activism that helped to bring it into being. In spite of irrefutable epidemiologic and programmatic evidence, meaningful inclusion of key populations and protection of the human rights of people affected by and at risk of HIV, TB, and malaria are still seen as side issues by governments and donors. The Global Fund must reclaim and act on the spirit of solidarity that characterized its origins to be a leader in making human rights central to global health programming.

This report reflects on the founding values of the Global Fund, where it has made progress and where it has fallen short. It outlines three critical areas that require attention and advocacy:

A period of changing global health governance and a dramatically shifting geography of poverty are part of the context for this briefing paper’s consideration of the impact of changes at the Global Fund to Fight AIDS, TB, and Malaria, including the Fund’s so-called New Funding Model.

This report is a resource for advocates working to assess the impact of the New Funding Model and to help shape the next five-year strategy.

The Quest to Boost Africa’s Fight Against COVID-19

While Africa consumes 25 percent of the world’s vaccines, only one percent of vaccines are manufactured there. The mRNA vaccine manufacturing hub in South Africa is working to change that.

Rothman, a scholar-advocate of the highest order who had a profound influence on Open Society, wrote on a wide array of subjects concerning ethics and medicine, and helped free thousands of people from involuntary institutionalization.

A growing body of research shows that Western models of mental health don’t work for everyone. When it comes to care or policy, policymakers should first listen to those with lived experience of mental health challenges.