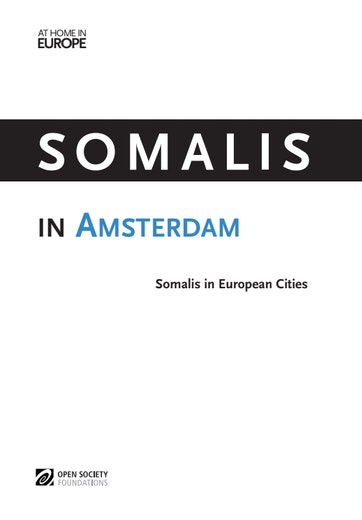 Somalis in Amsterdam explores the experiences and concerns of the Somalis living in the city of Amsterdam, focusing on five areas of local policy—employment, education, health, political participation, and policing—as well as broader themes of belonging and identity.

The Netherlands is home to one of Europe’s largest Somali communities. Somalis in Amsterdam are a diverse group—including first-generation refugee and asylum seekers who have recently fled the war in Somalia, second-generation Dutch Somalis born in the Netherlands, and Somalis who arrived in the 1990s as refugees and who are now Dutch citizens.

Somalis in Amsterdam is part of a seven-city research series, Somalis in European Cities, by the Open Society Foundations’ At Home in Europe project, which examines the realities of people from Somali backgrounds in Amsterdam, Copenhagen, Helsinki, Malmo, Leicester, London, and Oslo.