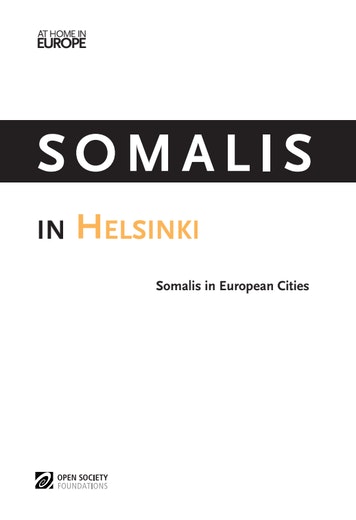 Somalis in Helsinki explores the experiences of Somalis in employment, education, health, political participation, and policing as well as their sense of identity and belonging in Helsinki.

Until recently, Finnish society had been somewhat homogenous but it is becoming increasingly diverse. People with Somali origins are now the third-largest group of foreign origin in Finland. This Open Society report offers the most up-to-date insight on how Somalis feel about where they live and what challenges and opportunities there are for inclusion policies in Helsinki.

Somalis in Helsinki is the first report in the Somalis in European Cities series produced by the Open Society Foundations’ At Home in Europe Project. It is the result of research that examines Somali living conditions in seven cities across Europe (Amsterdam, Copenhagen, Helsinki, Leicester, London, Malmo, and Oslo), as well as the ways in which municipal authorities counter growing social, political, and economic tensions and consider the needs of Somalis in key decision-making.