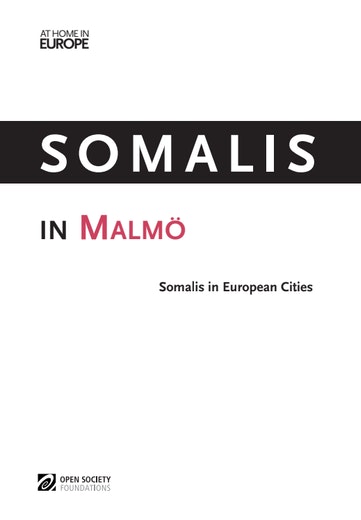 Somalis in Malmö explores the experiences and concerns of the Somalis living in the city of Malmö, focusing on local policy areas of employment, education, health, political participation, and policing as well as their sense of belonging and identity.

Sweden has a far higher proportion of Somali immigrants than other countries where many Somalis live, and people of Somali origin make up 0.4 percent of the Swedish population. This Open Society report offers the most up-to-date insight on how Somalis feel about where they live and what challenges and opportunities there are for inclusion policies in Malmö.

Somalis in Malmö is part of a seven-city research series, Somalis in European Cities, by the Open Society Foundations’ At Home in Europe project, which examines the realities of people from Somali backgrounds in Amsterdam, Copenhagen, Helsinki, Malmo, Leicester, London, and Oslo.