State Capture of Bosnia and Herzegovina’s Judiciary and Public Prosecution 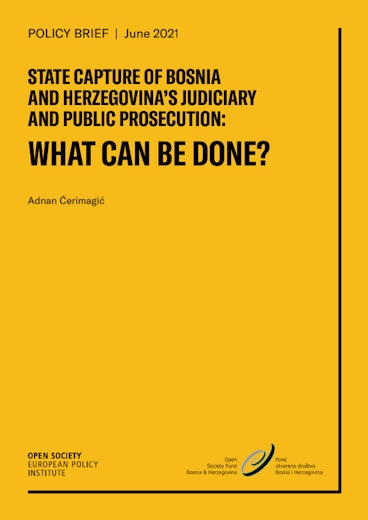 Despite over two decades of intensive reforms, most experts, legal professionals, and the public agree: Bosnia and Herzegovina’s judiciary and public prosecutors remain captured. Those seeking to advance their own interests—both from the political and corporate spheres—exert undue influence over the country's legal system. To push for reform, and to protect judges and prosecutors from undue political and economic influence, the European Union has deployed and financed various political and technical instruments.

This policy paper, based on a study published in January 2021, looks at the role of judges and public prosecutors in Bosnia and Hercegovina, and how to improve their selection, protection, sanctioning, promotion, financing, and incentives to deal with complex and high-profile cases. It also suggests much needed improvements to systems for disclosing assets and assigning cases and looks to the judiciary itself for greater transparency and prosecutorial discretion.

There Is An Alternative

The Climate Emergency Demands a New Approach to Investor-State Disputes

The international community needs to adjust its approach to trade and investment agreements until the public interest is truly served.

A Victory for Workers

Why Uber’s Loss Is a Win for Labor Rights

Thanks to a recent ruling from the United Kingdom’s highest court, Uber will now be recognized as what it has always been—an employer. This marks a significant step forward for workers’ rights in the gig economy.