Strangers at the Door: Night Raids by International Forces Lose Hearts and Minds of Afghans 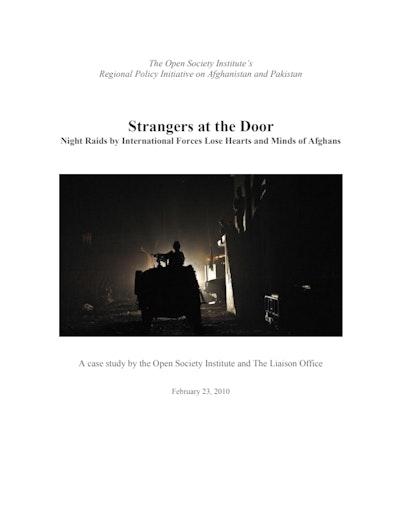 This briefing paper, issued by the Open Society Foundations and Afghan nongovernmental organization The Liaison Office, reports that night raids by international forces in Afghanistan are widely associated with abuse and impunity. These raids, which are often based on misinformation or bad tips, also lead to the detention of innocent people. This discredits the justice system, alienates the population, and undermines efforts to strengthen the rule of law. The paper concludes that Afghans' negative perceptions of international military actors will not change as long as abuses associated with night raids continue.

The paper is based on research conducted between September and December 2009 to understand how Afghan communities viewed international forces and whether they considered new military policy reforms to be effective. Though the study focused on the two conflict-prone southeastern provinces of Paktia and Khost, similar responses have been documented in other regions of Afghanistan, suggesting a widespread, consistent problem.