The Strategic Costs of Civilian Harm 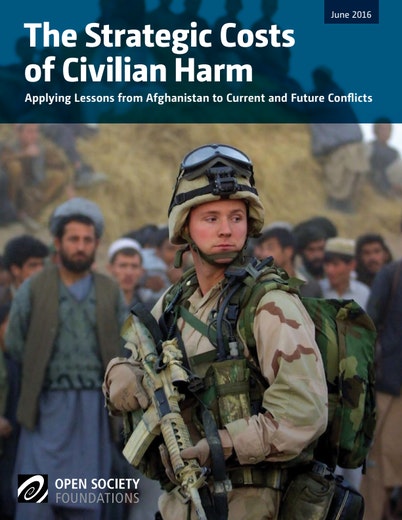 The level of “civilian harm”—the military’s term for killing innocent civilians and causing major political, social, and economic disruption—was adversely impacting the United States’ efforts to defeat the Taliban and weakening the legitimacy of the U.S. and Afghan governments.

The report, The Strategic Costs of Civilian Harm: Applying Lessons from Afghanistan to Current and Future Conflicts, examines how the U.S. military learned from its early mistakes in Afghanistan and applied lessons to mitigate civilian harm. In fact, starting in 2009, the U.S. military recognized its mistakes and started to understand the high strategic cost of civilian harm. The military’s changes led to a significant reduction in civilian deaths during the next few years.

The report argues that the United States should develop a Uniform Policy on Civilian Protection. The new standards would apply to all U.S. military operations in current and future conflicts and, hopefully, better protect civilians caught in conflict.

The Enduring Toll of Civilian Harm

The United States discovered the true costs that civilian casualties had on its efforts in Afghanistan. It shouldn’t have to learn those lessons again.