Submission to the European Commission on Proposed Antiterrorism Directive 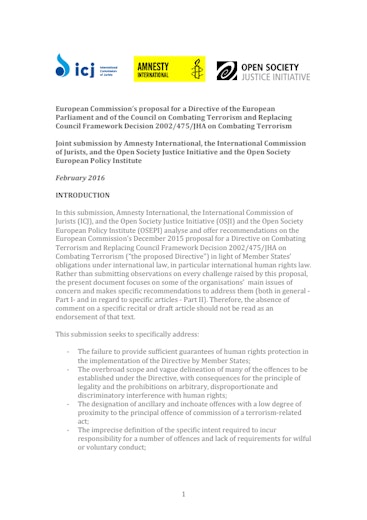 This document was submitted by the Open Society Foundations, Amnesty International, and the International Commission of Jurists. It provides comments on the European Commission’s December 2015 draft proposal for a Directive of the European Parliament and of the Council on Combating Terrorism and Replacing Council Framework Decision 2002/475/JHA on Combating Terrorism.

The proposed Directive develops and extends the criminalisation of terrorism-related acts in EU law, building on Framework Decision 2002/475/JHA on Combating Terrorism as amended by Framework Decision 2008/919/JHA. The impetus for the new offences included in the proposed Directive is said to be UN Security Council Resolution 2178 (2014), which seeks to address what is often characterized as the “foreign terrorist fighters” phenomenon and provides that:

“Member States shall … prevent and suppress the recruiting, organizing, transporting or equipping of individuals who travel to a State other than their States of residence or nationality for the purpose of the perpetration, planning, or preparation of, or participation in, terrorist acts or the providing or receiving of terrorist training, and the financing of their travel and of their activities”.

The Justice Initiative's joint submission to the draft Directive expresses concerns over a number of weak human rights protections in the proposed text.