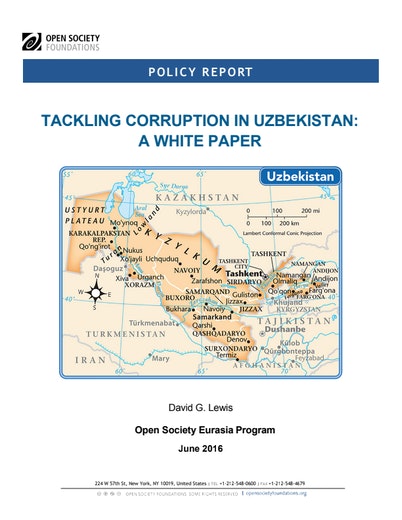 In February 2016, the Amsterdam-based telecoms company Vimpelcom paid almost US$800 million in fines to settle charges of paying bribes to operate in Uzbekistan. The case came on top of several other investigations, and highlights the elaborate system of corruption and bribery that undermines business, governance, and the economy in this Central Asian state.

Tackling Corruption in Uzbekistan provides a detailed account of these problems, and chronicles how they became endemic in the country’s political and economic life. It is an environment of informal decision making, opaque regulations, and a lack of independent oversight. These conditions contribute to growing inequality, and fuel power struggles among Uzbekistan’s economic and political leaders. All of this poses a grave threat to the country’s long-term stability.

The Uzbek government’s anticorruption campaigns do little to address systemic problems. Instead, they are used by officials to settle scores and consolidate power through selective prosecutions. The government also uses harassment, persecution, and imprisonment to stifle independent journalists and civil society activists who monitor and report on corruption. Up to now, international technical assistance programs have had limited impact. Tackling Corruption in Uzbekistan provides analysis and recommendations to help the international community strengthen its efforts to investigate allegations of money laundering and corporate malpractice, and support those who challenge corruption both inside and outside the country.

A new report examines corruption in the Central Asian state, where political and economic power have merged to create a hotbed of unscrupulous activity.

Ten Years after Uzbekistan’s Massacre, the Tragedy Continues to Unfold

In 2005, Uzbek security forces killed hundreds of demonstrators in the city of Andijan. The lingering effects of that tragedy should give pause to countries thinking about re-engaging the regime.

Despite Cosmetic Reforms, Modern Slavery Is Alive and Well in Uzbekistan

The authorities claim they're cracking down on child labor, but in many ways, things have gotten even worse.