The Concept of Chilling Effect

Its untapped potential to better protect democracy, the rule of law, and fundamental rights in the EU.
Facebook Twitter LinkedIn 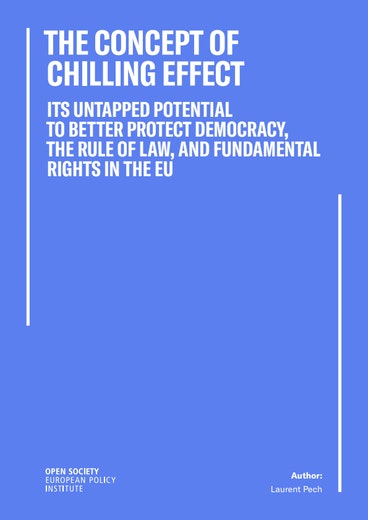 This publication from the Open Society European Policy Institute, the Brussels-based policy and advocacy branch of the Open Society Foundations network, and authored by Professor Laurent Pech, examines whether it is possible to use the chilling effect to promote and protect democracy, rule of law, and fundamental rights.

In its negative form, the chilling effect is used by some governments to create a climate of self-censorship that deters democratic actors such as journalists, advocates and judges from speaking out.

To stop autocratic-minded authorities from achieving their goal of inspiring self-censorship among democratic actors, this report recommends systemically integrating the concept of chilling effect into the EU’s infringement framework of analysis. This will establish a foundation to better allow the EU to protect freedom of association, judicial independence, and media freedom.