Torture, Transfers, and Denial of Due Process: The Treatment of Conflict-Related Detainees in Afghanistan 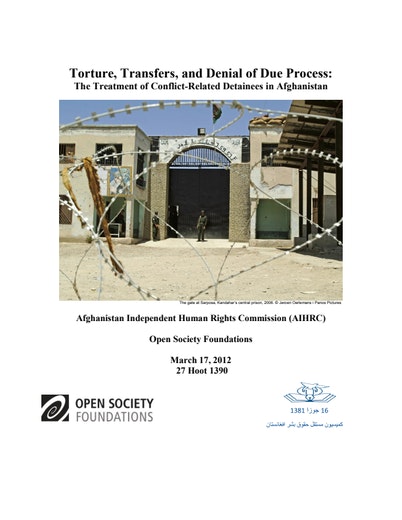 The report found credible evidence of torture at nine separate NDS facilities and a number of ANP locations, including beatings, suspension, electric shocks, and threats of physical violence and sexual abuse, which were routinely used to obtain confessions and other information. The report also details systematic violations of due process, and a persistent failure to hold Afghan officials accountable for abuse. The AIHRC and Open Society also documented cases in which U.S. transferred detainees were subjected to torture by NDS officials.

The report calls on the Afghan government to fully investigate allegations of abuse, hold those responsible accountable, and ensure that AIHRC monitors have full, unfettered access to all detention facilities. The report also recommends that the ISAF and the United States ensure no detainees are transferred to Afghan detention facilities where they face a real risk of torture and that all U.S. forces in Afghanistan are subject to ISAF detainee transfer policies and monitoring.