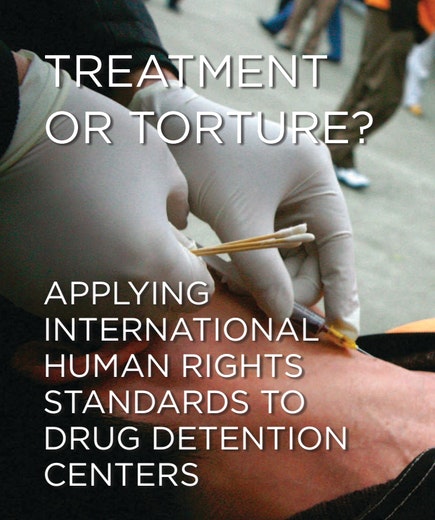 People identified as drug users in many countries are confined to abusive locked detention centers for months or even years. Such detention centers are supposedly mandated to treat and "rehabilitate" drug users, but the "treatment" they receive in some cases amounts to torture or other cruel, inhuman, and degrading punishment.

In Treatment or Torture? Applying International Human Rights Standards to Drug Detention Centers, legal experts review common forms of abuse in drug detention centers and show how these practices in many cases are in violation of basic human rights treaties widely ratified by most nations worldwide.

International health and drug-control agencies—including the UN Office on Drugs and Crime, UNAIDS, and the World Health Organization—all endorse comprehensive, evidence-based drug dependence treatment services. Yet drug detention centers rarely provide treatment that meets these standards. Depending on the country, so-called rehabilitation consists of a regime of military drills, forced labor, psychological and moral re-education, and shackling, caning, and beating.

Treatment or Torture? comes in advance of the International Day against Drug Abuse and Illicit Trafficking and the International Day in Support of Victims of Torture—both on June 26, 2011. The report was published by the Campaign to Stop Torture in Health Care, a coalition led by the Open Society Foundations, and featured legal analysis by Human Rights Watch, Harm Reduction International, and the Canadian HIV/AIDS Legal Network.