Unveiling the Truth: Why 32 Muslim Women Wear the Full-Face Veil in France 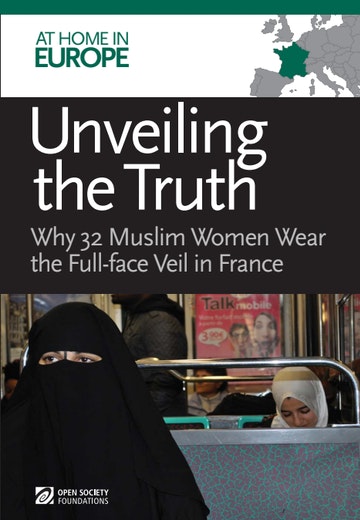 Following a period of intense public debate, legislation banning the face veil in France came into effect on April 11, 2011.

This report from the At Home in Europe Project aims to distinguish myths and misrepresentations surrounding women who wear the full-face veil from the actual experiences and testimonies of the women themselves, by reporting on the women’s backgrounds, their decisions to wear the veil, their daily experiences in public, and their views on the legislation.

Based on the testimony of 32 women across France, Unveiling the Truth offers the opportunity to hear directly from the women who are affected by the ban on face coverings, all of whom freely chose to wear the veil without, and often in spite of, pressure from family members and spouses. The stories they tell about their lives are sometimes humorous but more often than not heart-rending, especially in relation to their treatment by strangers, members of their communities, the media, and politicians.

Contrary to the usual stereotype of Muslim women who wear the face veil, the majority of women whose voices are heard are like any other French woman with active social lives: working, attending classes, seeing friends, eating out, playing sports, and actively engaging in local activities.

"We go out. When we have money, we shop; when we don’t, we go window-shopping... Sometimes we hang out together at someone's place and each of us brings some food. We make ourselves pretty. We have a normal life just like everyone else."
—Aisha, Paris

The report reveals that since the debate on the face veil began, a large number of the women have experienced verbal and sometimes physical abuse, and as a direct result have preferred to limit their time spent outside the home.

"I particularly miss going out. Now you have to think twice before going out and I’ve really withdrawn into myself a lot because when you go out people are really very, very nasty. Before, it was kind of OK. You had some stares, sometimes people took liberties and said certain things, but not as much as nowadays, especially since it’s been covered so much in the media."
—Karima, Marseille

The report reveals the impact of the legislation on the feelings of national identity and belonging with a large number of the 32 women—30 of whom are French citizens—feeling alienated and abandoned by the republic that they would otherwise call home.

At a time in which France and other countries across Europe are debating the compatibility of Islam with European values, this study offers the perspective of those whose lives are touched, sometimes profoundly, by such debates and resulting legislation but which is so often overlooked.

The report is available for download in English and French.