The War on Drugs: Wasting Billions and Undermining Economies 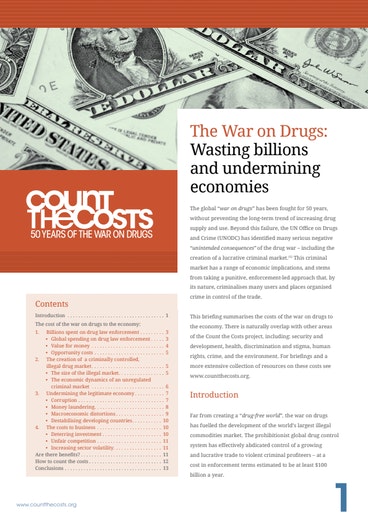 Whilst accurate figures are hard to come by, global spending on drug law enforcement certainly exceeds $100 billion each year. Given current economic conditions it is more important than ever that spending is effective and not a waste of taxpayer money.

However, the huge investments in enforcement have consistently delivered the opposite of their stated goals—to reduce drug production, supply and use. Instead they have created a vast criminal market. This in turn has substantial social and economic costs, through crime and ill health, far exceeding even the billions in enforcement spending.

There are huge opportunity costs to wasteful expenditure on this scale. As drug enforcement budgets continue to grow, other areas are being starved of funds, and cuts in government budgets are hitting public services and support for the needy.

Despite the appalling track record of failure, the level of value-for-money scrutiny applied to drug enforcement spending has been almost zero, at both national and international levels. At a time of global economic crisis, after literally trillions wasted over the last half-century, it is time to meaningfully count the real economic costs of the war on drugs.

This report is part of the Count the Costs series. Count the Costs is a collaborative project between a range of organizations that, while representing a diverse range of expertise and viewpoints, share a desire to reduce the unintended costs of the war on drugs.

Alternative World Drug Report: Counting the Costs of the War on Drugs

This report exposes the failure of governments and the UN to assess the extraordinary costs of pursuing a global war on drugs, and calls for UN member states to explore all the alternatives.