The Way Forward for Turkey and the EU: A Strategic Dialogue on Foreign Policy 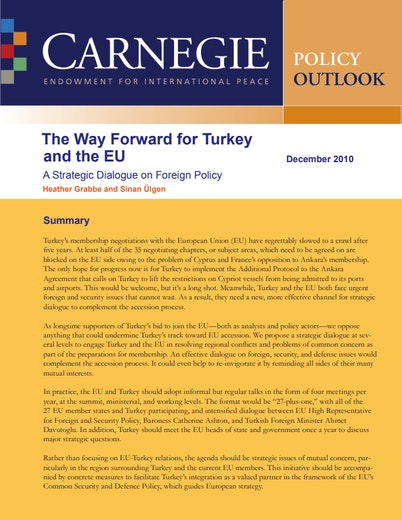 Turkey’s membership negotiations with the European Union have regrettably slowed to a crawl after five years. At least half of the 35 negotiating chapters, or subject areas, which need to be agreed on are blocked on the EU side owing to the problem of Cyprus and France's opposition to Ankara's membership.

The only hope for progress now is for Turkey to implement the Additional Protocol to the Ankara Agreement that calls on Turkey to lift the restrictions on Cypriot vessels from being admitted to its ports and airports. This would be welcome, but it’s a long shot. Meanwhile, Turkey and the EU both face urgent foreign and security issues that cannot wait. As a result, they need a new, more effective channel for strategic dialogue to complement the accession process.

As longtime supporters of Turkey’s bid to join the EU—both as analysts and policy actors—we oppose anything that could undermine Turkey’s track toward EU accession. We propose a strategic dialogue at several levels to engage Turkey and the EU in resolving regional conflicts and problems of common concern as part of the preparations for membership. An effective dialogue on foreign, security, and defense issues would complement the accession process. It could even help to re-invigorate it by reminding all sides of their many mutual interests.

In practice, the EU and Turkey should adopt informal but regular talks in the form of four meetings per year, at the summit, ministerial, and working levels. The format would be "27-plus-one," with all of the 27 EU member states and Turkey participating, and intensified dialogue between EU High Representative for Foreign and Security Policy Baroness Catherine Ashton, and Turkish Foreign Minister Ahmet Davutoglu. In addition, Turkey should meet the EU heads of state and government once a year to discuss major strategic questions.

Rather than focusing on EU-Turkey relations, the agenda should be strategic issues of mutual concern, particularly in the region surrounding Turkey and the current EU members. This initiative should be accompanied by concrete measures to facilitate Turkey’s integration as a valued partner in the framework of the EU's Common Security and Defence Policy, which guides European strategy.

The full publication by Heather Grabbe, director of the Open Society Institute-Brussels, and Sinan Ülgen, visiting scholar at Carnegie Europe in Brussels, is available for download.