When Law Doesn’t Rule: State Capture of the Judiciary, Prosecution, Police in Serbia 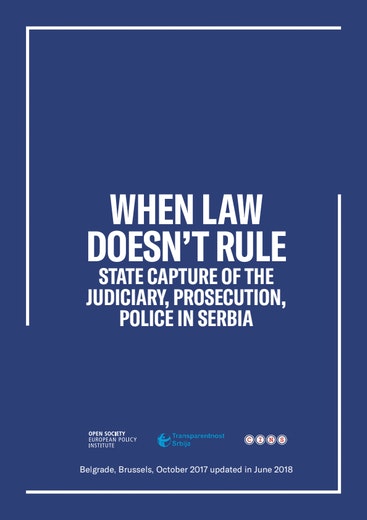 The study When the Law Doesn’t Rule, by the Open Society European Policy Institute, Transparency Serbia, and the Centre of Investigative Journalism of Serbia, identifies seven ways in which political control is being exerted over the judiciary, prosecution, and police in Serbia, and how systemic weaknesses in the exercise of the rule of law are being exploited. These include limited accountability of judges and prosecutors for ineffectiveness; the appointment of public prosecutors and court presidents on political grounds; an inordinate amount of discretion allowed to law enforcement when making investigation and prosecution decisions; inappropriate and partial briefing of the media; the misuse and manipulation of statistics; direct political influence on law enforcement; and deliberately dysfunctional criminal investigations in politically sensitive cases.

The report illustrates these seven administrative and systemic weaknesses through 12 case studies.

By allowing the continued militarization of its police forces, the government in France risks normalizing authoritarianism and diminishing civil liberties. Recent confrontations between police and protestors only further emphasize the peril.

Feffer discusses his book on Central and Eastern Europe’s multiple transformations and the fate of the liberal project.

Research in Eastern Europe and the Western Balkans has confirmed what many people in the region know already: too many governments are using bureaucratic tricks—and brute force—to restrict the basic right to free speech.