When “Trust but Verify” Is Not Enough: Continued Pressure Is Needed to End Forced Labor in Uzbekistan 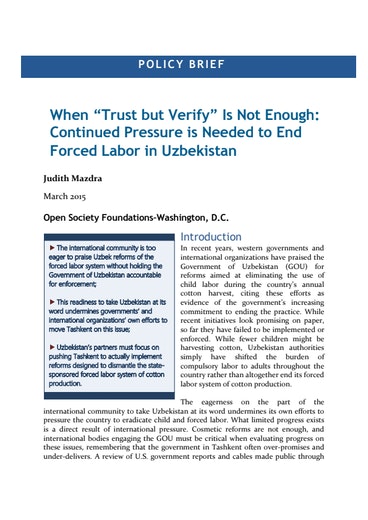 Over the past several years, the Uzbekistan government has announced steps to end its use of child labor during the country’s annual cotton harvest. But that does not mean Uzbekistan has stopped forcing its citizens to harvest cotton. It has shifted the burden of compulsory labor onto adults.

A review of U.S. government reports and cables made public through WikiLeaks clearly demonstrates how one key international actor—the United States—repeatedly has rushed to embrace promises of progress that later proved ephemeral. As this policy brief notes, a clear and consistent voice from the United States and international community is necessary to force changes to Uzbekistan’s forced labor program.

A new report examines corruption in the Central Asian state, where political and economic power have merged to create a hotbed of unscrupulous activity.

Ten Years after Uzbekistan’s Massacre, the Tragedy Continues to Unfold

In 2005, Uzbek security forces killed hundreds of demonstrators in the city of Andijan. The lingering effects of that tragedy should give pause to countries thinking about re-engaging the regime.

Despite Cosmetic Reforms, Modern Slavery Is Alive and Well in Uzbekistan

The authorities claim they're cracking down on child labor, but in many ways, things have gotten even worse.