Whistleblowers for Change: The Social and Economic Costs and Benefits of Leaking and Whistleblowing 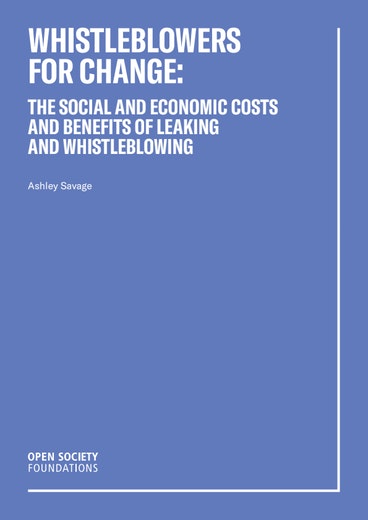 The decision to be a whistleblower is not easy. Mental trauma, the risk of retaliation, the potential loss of employment or ostracization by work colleagues—not to mention the impact on one’s personal life—all weigh heavily on the individual who decides to speak out for the common good. But when potential whistleblowers feel too vulnerable to act, it's society itself which suffers.

In this report, whistleblowers from eight European countries describe what they experienced after they took a stand. Additionally, civil society experts weigh in on how the EU can craft policies to better protect whistleblowers. The question of how to define whistleblowing—does it apply to sexual harassment, can NGOs be considered whistleblowers, and so on—is also explored.

The report ultimately recommends an EU-wide directive on whistleblowing, which it argues would give whistleblowers the protection they need to step forward. The report also argues that a multi-level, multi-stakeholder approach would emphasize the value of whistleblowers and the crucial role they play in a healthy open society.

The EU’s New Privacy Rules Are Only a First Step

While the new rules governing how large tech companies use people’s data are a step in the right direction, more must be done in order to rein in the excesses of “surveillance capitalism.”

Italians Have a Right to Accountable Government

Italy’s freedom of information law has been in force since December. So why are government officials still refusing to answer Italians’ basic questions?

How We Kept the Internet Open in Europe

When telecom companies launched an assault on net neutrality, a coalition of advocates fought back with an historic response.