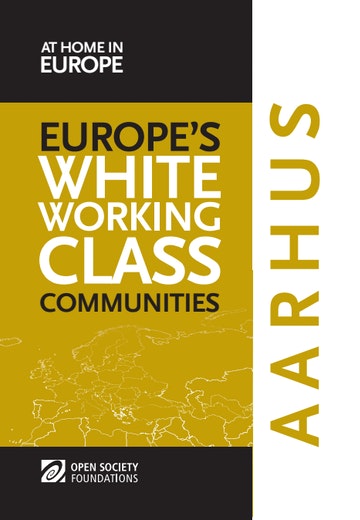 This report is part of a six-city research series titled Europe’s White Working Class Communities, which examines the realities of people from majority populations in Aarhus, Amsterdam, Berlin, Lyon, Manchester, and Stockholm.

White Working Class Communities in Aarhus explores the views and experiences of the majority population in Trigeparken, a public housing community in Aarhus. The report focuses on six areas of local policy—education, employment, housing, health and social protection, policing and security, and civil and political and participation—as well as broader themes of belonging and identity and the role of the media.

Trigeparken belongs to a public listing of the most deprived neighborhoods in Denmark (known as the “ghetto list”) that, contrary to its original aim of furthering social inclusion, has reinforced social and physical stigmas and affected the development of the community. However, there are encouraging developments in Trigeparken. Many residents have lived there for many years and have a strong connection to the neighborhood. They also have a positive view of local policy developments in areas like youth crime prevention and school development and are working to improve other areas.

This report is part of a series by the Open Society Foundations’ At Home in Europe project, providing groundbreaking research on the realities of a section of the population whose lives are often caricatured and whose voices are rarely heard in public debates on integration, social cohesion, and social inclusion. Through a comparative lens, the project seeks to highlight parallels and differences in policies, practices, and experiences across European cities.

Lessons from the White Working Class Community in Stockholm

The municipality of Botkyrka was the focus of an Open Society report on white working class communities in Stockholm. The report’s authors discuss how majority Swedes experience Sweden’s demographic change.