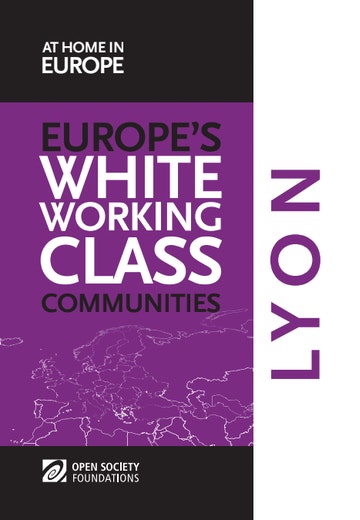 White Working Class Communities in Lyon explores the views and experiences of the majority population in the 8th arrondissement (borough) of Lyon, a diverse and dense area, and socially and economically one of the most challenged areas in the city. Given that in France it is not permitted to define people based on ethnic or racial characteristics, and it is very difficult to talk explicitly about ethnicity, the term “majority population” was used as an open category to recruit focus groups’ participants. This study is the largest, and to our knowledge, only empirical study on the majority population that has been conducted in France.

Lyon is considered to be a role model in France for working actively on inclusion and cohesion issues. This report analyzes six areas of its local policy—education, employment, housing, health and social protection, policing and security, and civil and political and participation—as well as broader themes of belonging and identity and the role of the media.

The findings, permeated by a changing socio-economic environment and anxiety over perceived and real differences, are complex. For instance, residents felt their French identity was under pressure but had strong local identities. Likewise, they had serious hardships in different areas and felt they were ignored by the state and the media but were also generally positive about their future and did not feel particularly disempowered.

White Working Class Communities in Lyon is part of a six-city series by the Open Society Foundations’ At Home in Europe project providing groundbreaking research on the realities of a section of the population whose lives are often caricatured and whose voices are rarely heard in public debates on integration, social cohesion, and social inclusion. Through a comparative lens, the project seeks to highlight parallels and differences in policies, practices and experiences across the European cities of Aarhus, Amsterdam, Berlin, Lyon, Manchester, and Stockholm.

Western Europe has undergone significant transformation over the past forty years. New research examines how these changes have impacted white working class communities.