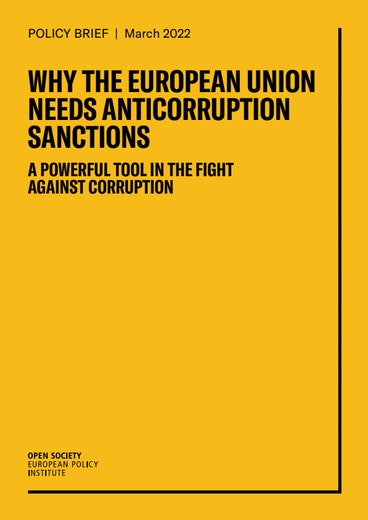 In December 2020, the EU adopted the landmark EU Global Human Rights Sanctions Regime, but unlike its allies, failed to include corruption as a sanctionable activity. Recent revelations from the Pandora and Panama Papers shone a spotlight on secret offshore accounts in western jurisdictions and show the urgent need to act against kleptocratic and illicit money flows.

This global political momentum in the fight against corruption—together with a growing realization that corruption is a threat to the stability and security of democracy, rule of law, and human rights—is a crucial opportunity for the EU and its member states to adopt legally sound anti-corruption sanctions. Furthermore, adopting a robust anticorruption sanctions regime would enable the EU to coordinate with like-minded allies such as the United States, United Kingdom, Canada, and Australia, to meet its foreign policy objectives.