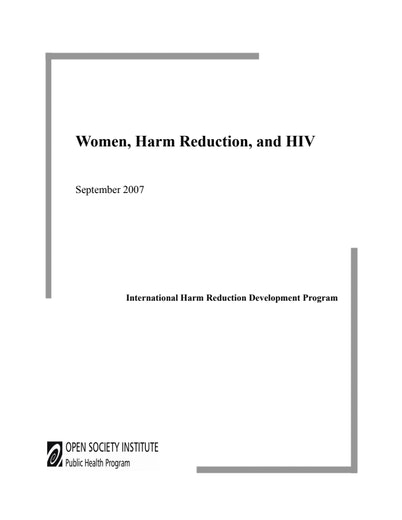 For women who inject drugs, the stigma of injection drug use is added to gendered discrimination; these factors combined can push women into behaviors that increase their risk of HIV, according to this report published by the International Harm Reduction Development Program. There is a higher likelihood that women drug users will provide sex in exchange for housing, sustenance, and protection; suffer violence from sexual partners; and have difficulty insisting that their sexual partners use condoms. Women drug users may also rely on men to inject them with drugs and to acquire drugs and injection equipment, a behavior shown to increase the likelihood of injection with contaminated equipment.

Women, Harm Reduction, and HIV looks at factors that reduce women drug users’ access to health care including punitive policies, discrimination by police and health care providers, the intense social stigma attached to drug use by women, a preponderance of harm reduction and drug treatment programs directed primarily toward men, an absence of sexual and reproductive health services for drug users, and poor access to effective outpatient drug treatment, in which methadone or buprenorphine are prescribed to reduce cravings for illicit opiates. Pregnant drug users are particularly vulnerable. In too many instances, they receive little or no accurate information about drug use during pregnancy or prevention of mother-to-child transmission of HIV. In some countries pregnant drug users are rejected by health care providers, threatened with criminal penalties or loss of parental rights, or coerced into having an abortion or abandoning their newborns to the state. Poor access to medication-assisted treatment jeopardizes the pregnancies of opiate-dependent drug users.

The report demonstrates that increasing women drug users’ access to needed services, including drug treatment, harm reduction, and sexual and reproductive health care services, is crucial. Achieving this goal requires: policies that encourage women to seek drug treatment and harm reduction rather than punishing or stigmatizing them for drug use during pregnancy or motherhood; increased availability of medication-assisted treatment; incorporation of sexual and reproductive health and other women’s services into harm reduction programs; flexible, low-threshold services that are more convenient for women with children; and links between harm reduction, drug treatment, women’s shelters, and violence prevention services.

Women, Harm Reduction, and HIV is available for download. An abridged version of the article is available in the journal Reproductive Health Matters, 2008; 16(3): 168-181.

By bringing harm reduction to the faith community, Faith in Public Life is using the church to save lives in the face of the overdose crisis.