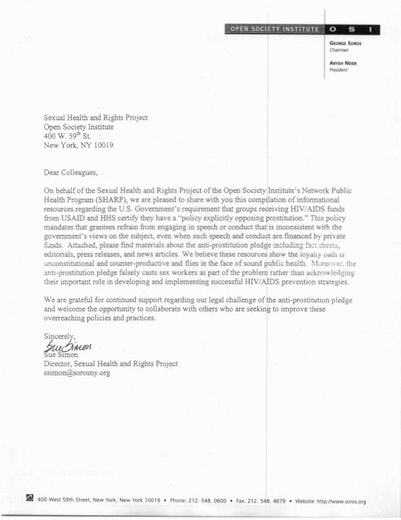 The Sexual Health and Rights Project (SHARP) of OSI's Public Health Program has prepared a compilation of informal resources regarding the U.S. government's requirement that groups receiving HIV/AIDS funds from the United States Agency for International Development (USAID) or the U.S. Department of Health and Human Services certify they have a "policy explicitly opposing prostitution." This policy mandates that grantees refrain from engaging in speech or conduct that is inconsistent with the government's views on the subject, even when such speech and conduct are financed by private funds.

The resources provided here include the anti-prostitution pledge, fact sheets, editorials, press releases, and news articles. SHARP believes these resources show that such a loyalty oath is unconstitutional and counter-productive, and flies in the face of sound public health. Moreover, the anti-prostitution pledge falsely casts sex workers as part of the problem rather than acknowledging their important role in developing and implementing successful HIV/AIDS-prevention strategies.