Arrest the Violence: Human Rights Violations Against Sex Workers in 11 Countries in Central and Eastern Europe and Central Asia 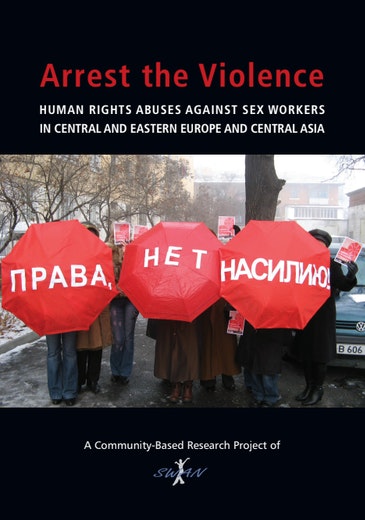 On December 17, to mark the International Day to End Violence Against Sex Workers, the Sex Workers’ Rights Advocacy Network (SWAN) launched its groundbreaking report, Arrest the Violence: Human Rights Violations Against Sex Workers in 11 Countries in Central and Eastern Europe and Central Asia.

Produced with support from the Open Society Sexual Health and Rights Project, Arrest the Violence is the first piece of research done under the leadership of sex workers to document the human rights violations they face across the region. Based on interviews with more than 200 male, female, and transgender sex workers between 2007 and 2009, the report provides evidence of widespread violence and discrimination against sex workers—particularly from police—including beating, rape, and extortion.

Intimidated by hostile police attitudes and practices, sex workers are often left without any protection from violence. According to SWAN’s research, 42 percent of sex workers interviewed had been physically abused in the past year and 36 percent had been sexually abused; only 26 percent of respondents felt they could report violence to the police. Sex workers also report being afraid to carry condoms because police will use them as evidence of prostitution. This compromises the health of sex workers and their clients.

In the report, SWAN calls on governments to hold police accountable for these abuses, and provides recommendations for international agencies and donors to promote the health and human rights of sex workers.